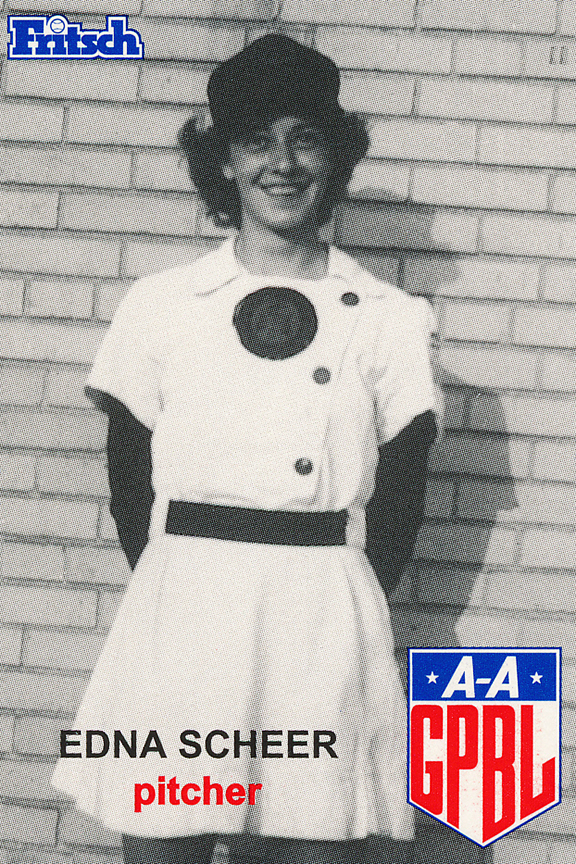 Edna was a good hitter as well as a good hurler. She played in 18 games but was only credited with 3 wins and 1 loss. Edna had a lifetime batting average of.286 which was exceptional for a pitcher in the league.

Edna H. Scheer was a pitcher who played in the All-American Girls Professional Baseball League. Listed at 5 ft 5 in (1.65 m), 104 lb., Scheer batted and threw right-handed. She was born in Cedarburg, Wisconsin.

Edna Scheer played briefly for the Rockford Peaches during the 1950 season.

"Bunny," as her teammates called her, collected a 3–1 record in 71 innings of work as a reliever and spot starter, helping her team win the pennant and championship title. A highly disciplined hitter as well, she posted a slash line (BA/0BP/SLG) of .286/.375/.321.

After her baseball days, Scheer became an owner/partner in a restaurant business.

Since 1988 she is part of Women in Baseball, a permanent display based at the Baseball Hall of Fame and Museum in Cooperstown, New York, which was unveiled to honor the entire All-American Girls Professional Baseball League.

Scheer died in her hometown of Cedarburg on April 25, 2000 at the age of 73. She is buried at Zur Ruhe Cemetery in Ozaukee County, Wisconsin.