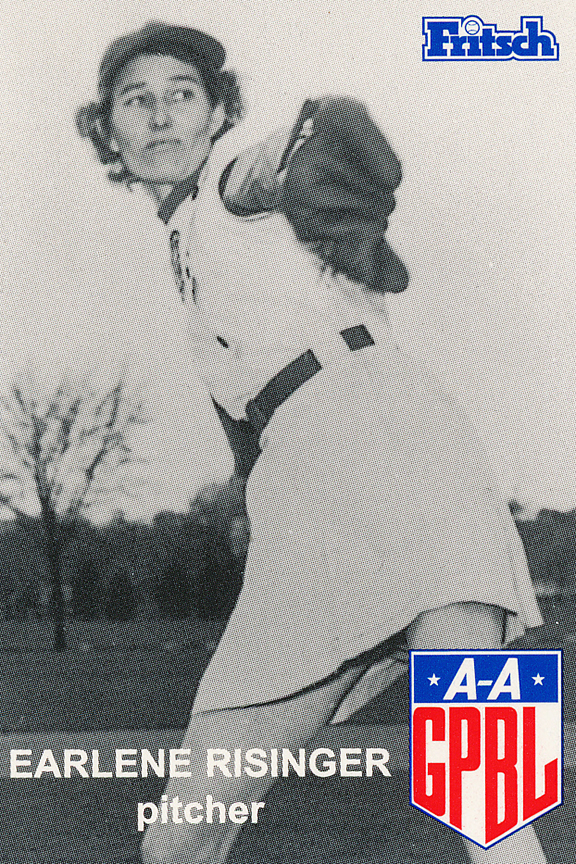 Hear about Earlene's experience in her own words through the Grand Valley State Oral history project.

Autobiography by EARLENE "BEANS" RISINGER, January 28, 2006
What did the All-American Girl's Baseball League do for me? In a word, everything. To be more specific, I was born in a rural area, in a small Oklahoma town, one that isn't even on the map. There was much poverty in 1927, and on through the years. I started working in the cotton fields so I could have shoes on my feet and clothes to wear.

The schools in those days were great because you learned the 3 R's, which were a good basic education. Basketball and baseball are the two main sports in rural areas and very competitive. Girls' basketball in Oklahoma has always gotten as much recognition as boys sports, and we also had softball teams. In high school, I got to coach first base on the boys' baseball team because then a gal couldn't participate in boys' sports. I learned to throw a baseball very young, as I was the first born, and my dad was a sandlot first baseman, so he taught me to throw overhand from the jump go.

After graduation, there I was with really no future. Going to college never was even thought about, as there was no money for college. So after being frustrated and working in the cotton fields for fifty cents an hour, I thought it might be my future as there were no factories or anything like that anywhere nearby.

The grocery store owner got the Daily Oklahoma newspaper delivered to the store, and I could read it. One day, I turned to the sports page and much to my surprise, there was a traveling All-American Girl's Baseball team going to play an exhibition game in Oklahoma City on their way back north from spring training. I never dreamed such a league existed. That was 1947. I dropped a post card to the sportswriter, who forwarded it to Chicago, and from this I got a letter asking me to come to Oklahoma City for a try-out. That's when life began.

I borrowed the money from a bank and started on a train for Rockford, Illinois, the home of the Rockford Peaches. By the time I got to Chicago and had to change trains, I was so homesick that I took the first train back to Hess, Oklahoma. I then went back to the cotton fields to repay the bank.

Then, in 1948, a second chance came. They had a team in Springfield, Illinois which wasn't so far away, so I made that on the bus. The manager of the team, Carson Bigbee, and the chaperone, Mary Rudis, took me under their wings, and I made the team as a pitcher. The greatest year of my life was 1948. I would go home at the end of every season as I still wasn't weaned away from home.

The expansion of the league to 10 teams brought about my allocation to Grand Rapids, Michigan in 1949, the home of the Grand Rapids Chicks, whose manager was Johnny Rawlings. In January of 1949, I was asked to go on an AAGPBL exhibition tour to South America, and I jumped at the chance. During this tour, Johnny Rawlings taught me the fine points of pitching.

I played for the Chicks through 1954, and when the league disbanded, I had the opportunity to go to x-ray school at Butterworth Hospital in Grand Rapids. Following the training, I began working in an orthopedic surgeon's office, and I have been there ever since.

When I say Baseball did everything for me, it's true. Possibly I would still be in Hess, Oklahoma, which isn't a bad place to live if you have a profession and can drive some place to work. At that time, I had nothing, and now I feel satisfied with my life, and I am a very happy person.

Earlene was born March 20, 1927, in Hess, Oklahoma, to Homer Francis and Lizzie Mae (Steen) Risinger.  She grew up during the Dust Bowl and Great Depression, where the western plains of Oklahoma proved to be as harsh and unforgiving as the economic landscape.  Earlene received the nickname “Beans” for her favorite food staple.  As a youngster and the first born of five children, Beans often escaped the rigor of working in the cotton fields by playing baseball with her family and friends.  By the time she graduated high school, Beans had honed her pitching skills.  In the spring of 1947, she decided to attend the “tryouts” in Oklahoma City for the All-American Girls Professional Baseball League (AAGPBL).  The leagues formed in 1943, when many minor league teams disbanded and the future of Major League Baseball was in doubt due to players either enlisting or were drafted into the armed services.  During the “tryouts”, Beans impressed league managers with her fastball and curve ball, both delivered in overhand motion.  She learned her technique when she was very young from her dad, who was a sandlot first baseman.

The AAGPBL offered her a contract to play in the 1947 season for the Rockford Peaches in Rockford, Illinois.  However, she got as far as Chicago when fear and homesickness overcame her, and she returned to Oklahoma.  One year later, the AAGPBL recruited her again for the 1948 season, and this time Beans reported to her new club in Springfield, Illinois.  She spent one year with the Springfield Sallies, a team that succumbed to low attendance and little community support. Beans went to Grand Rapids, Michigan, home of the Grand Rapids Chicks, where she played from 1949 to 1954.

She helped her team take the 1953 League Championship when she faced Kalamazoo cleanup batter Doris "Sammye” Sams with two out, the bases loaded and the Chicks ahead by one run. She clinched the title by striking out Sams, who was a two-time league player of the year and six-time all-star—and had homered in her previous at-bat.  The trophy is on display at the National Baseball Hall of Fame in Cooperstown, New York.  Risinger had a 2.51 career earned run average in the AAGPBL, and her best season was 1953, when her won-lost record was 15-10.

The AAGPBL disbanded in 1954, and Beans remained in Grand Rapids, where she enrolled in college and became an x-ray technician.  She worked in orthopedics and retired from Drs. Bert Korhonen and Richard Bereza’s office after 25 years of faithful service. She stayed in Grand Rapids until 2006, when she returned home to Oklahoma to be with her family.

Beans was a consultant on the movie “A League of Their Own”, based on the AAGPBL.  She even had her photo taken with the movie’s stars, Rosie O’Donnell and Madonna.  Her rise to fame never went to her head; instead, she always wanted to mentor young women to “reach for the stars.”  She wrote a one-page autobiography to send to young women to help them realize that dreams can come true.