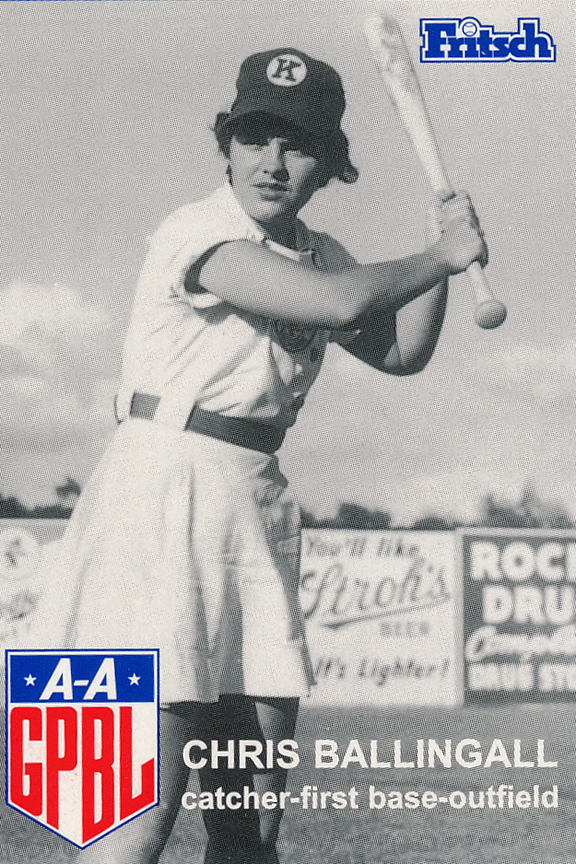 Chris Ballingall (born May 17, 1932) is a former female catcher who played from 1953 through 1954 in the All-American Girls Professional Baseball League.  Listed at 5’6”, 145 lbs., she batted left-handed and threw right-handed.

A native of Ann Arbor, Michigan, Ballingall learned to play baseball while catching for her twin brother. She had originally been offered a contract at the age of 15 to play in the AAGPBL, but her father did not want her to play then.  She had to wait six years before being signed in 1953. She entered the league with the Muskegon Belles, and was traded to the Kalamazoo Lassies during midseason.  She also appeared in a few games at first base and in the outfield.

In 1954, Ballingall posted a .242 batting average with 17 home runs and 40 RBIs in 90 games.  In the playoffs, she hit .444 with eight RBIs and two home runs, including one grand slam to help the Lassies clinch the AAGPBL’s last-ever championship title.  She and teammate Carol Habben, who hit a total of 16 homers (one in postseason), were dubbed the Home Run Twins because they terrorized opponents with their long ball bats.