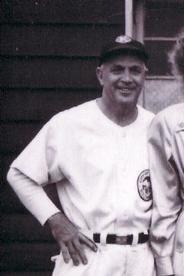 Charles Preston "Pres" Cruthers was a second baseman in Major League Baseball who played from 1913 through 1914 for the Philadelphia Athletics. Listed at 5 ft 9 in (1.75 m), 152 lb, Cruthers batted and threw right-handed. He was born in Marshalton, Delaware.[1]

Cruthers played briefly for the Athletics in part of two seasons. He was a member of two American League champion teams, including the 1913 World Champion, though he did not play in the Series. As a backup for regular Eddie Collins, he posted a .222 batting average in seven games (6-for-27), including one double and one triple while scoring a run. [2][

In six minor league seasons (1913–1918), Cruthers was a .268 hitter with six home runs in 648 games. He also managed the Kenosha Comets of the All-American Girls Professional Baseball League during the 1946 season.[4][5]

Cruthers is part of the AAGPBL permanent display at the Baseball Hall of Fame and Museum in Cooperstown, New York, which opened in 1988 and is dedicated to the entire league rather than any individual figure.[6]