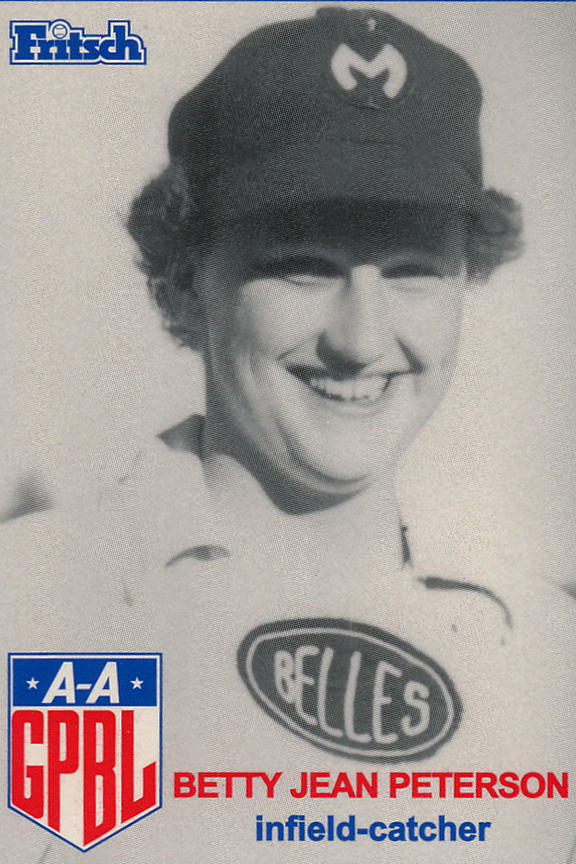 "There were three girls and one boy in my family, and my father spent many hours playing softball with us. I became quite good and played on an area softball team in the summers in my high school years.  There were no girls sports in our high school at that time."

In 1952 Betty Jean Peterson graduated high school and turned 18 years of age when the opportunity came to try out for the AAGPBL. Jean went to spring training and signed a contract with the Rockford Peaches. However, on the first road trip, the manager told Jean she needed more experience and thought it best that she return home, get more playing time, and return for tryouts in 1953. And that's exactly what Jean did.

In 1953 she returned and was again contracted by the league. Jean wanted to be a catcher but the Rockford Peaches had the experienced Ruth Richard on their team so Jean went to the Kalamazoo Lassies as a rookie catcher. Early in the season, she was loaned to the Muskegon Belles where she caught for Jo Hasham, a very experienced pitcher. Jean was also called upon to be a pinch runner, first base coach, and a relief catcher in late inning games for Kate Vondereau. Jean remembers, "It was just a tremendous thrill to be able to play in the league. I enjoyed every minute of it. We all loved doing what we were doing! I so enjoyed the girls, even the road trips! It was all a new experience for me, a young farm girl, and it was my first trip to the big city of Chicago!"  However, Jean had some bad luck at the end of the 1953 season when she split her fingers catching!

In 1954, Jean did not return her contract. She'd taken a new job, started dating her future husband, and had begun a new life  in central Illinois.

Jean married her beau in 1956 and began a family. "We farmed grain, corn, beans, and livestock. We milked the cows twice a day, fed the cattle twice a day, and we raised our three girls who all became cheerleaders." Jean has six grandchildren and one great grandchild and hopes one or two of them will develop into athletes.