By By Adele Maurier 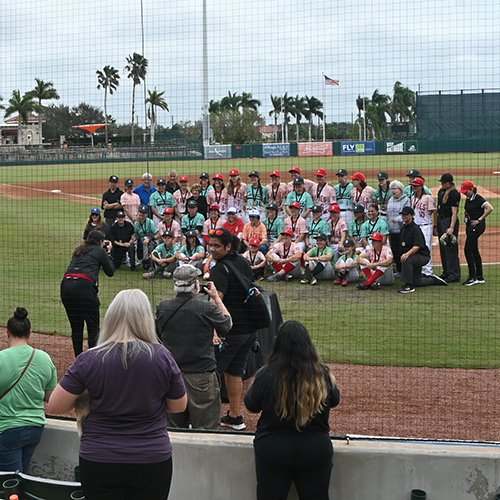 To borrow the concept of Arnold Hano’s “A Day in the Bleachers” I would like to share my observations from the grandstand at the inaugural All American Womens Baseball Classic Tournament held at Ed Smith Stadium, spring training home of the Baltimore Orioles in Sarasota Florida Nov. 19 -22, 2022.  A. M.  For a tournament synopsis click here.

A Ticket to History:  A Commentary
By Adele Maurier

I signed up to attend the All American Womens Baseball Classic Tournament almost a year before, but with the tournament’s postponement from January 2022 to November 2022 because of COVID, my anticipation had waned as many events added up in the interim as life became more normal again throughout the year.  It was November, a time when baseball is usually dormant, the World Series is over and most fans are resigned to wait until next year and focus on other things. I found my way into Ed Smith Stadium a beautiful park with a Spanish flair, surrounded by palm trees and with green grass ready for play.  As I settled in my seat November 19th, and got ready to keep score to get better acquainted with the players –it suddenly occurred to me:  The women warming up in front of me were playing BASEBLL.  I got excited –like “It’s opening day!” excited or “Our team is in the playoffs!” excited.  Of course I knew I was attending a women’s baseball tournament, but what really hit me was despite being a baseball fan since I was 5 or 6, being an associate member of the All American Girls Professional Baseball League Players association since 2013, meeting many former AAGPBL players, reading countless books and articles and watching documentaries about women playing baseball, I suddenly realized that I had NEVER seen a women play baseball.  Not in person, and not on TV.  I had never seen ONE woman play baseball in a game anywhere let alone four teams of women on a professional field.  Why had I not made an effort to go find a woman playing on a men’s team somewhere to take in a game?  Why had I not made plans to watch team USA at some point or other?  I don’t know.  But I do know why I was in the stands watching these women play.

The tournament was organized by the non-profit American Girls Baseball organization (AGB).  The AGB grew from ideas expressed in an meeting of former AAGPBL players.  They wanted to support today’s women baseball players.  The AGB was established in 2019 and has been work working to create opportunities for girls and women in baseball since that time with a strong team lead by President Sue Zipay, a former AAGPBL Rockford Peach.  I was able to attend one of the AGB’s clinics for girls in 2019 in Massachusetts.  The clinic was very good, well organized, well attended and well received. A clinic for girls was held one morning before tournament games in Sarasota as well.  It was so great to see all the smiles at those clinics.  I wish I could have attended one when I was a girl. But with this tournament, the AGB went beyond being one of many organizations supporting girls learning to play the game of baseball, to an organization supporting the women who are excelling in the game.  In so doing, the AGB is working to bridge the gap between and tie together generations of women players.

If this tournament marks the beginning of a new chapter in women’s baseball, and I hope it does, I had to be there.  Just imagine if you had the opportunity to be at Philip Wrigley’s first tryout for the AAGPBL.  A seat to history - that is the ticket I bought!  Whenever I go to a major or minor league baseball game I hope to see history, a future hall of fame player, a no hitter, a great play, at this tournament I did not have to hope to see history, I was guaranteed to see it.  I saw not just any 60 ball players but 60 headline makers, (Don’t believe me? Just Google any one of them). The tournament had four teams and nearly 60 players ranging in age from 15 to 47, most were from the U.S. with a handful from several other countries.  I imagine it was likely one of the largest gatherings of top U.S. women players in one place since the end of the AAGPBL.  They came from every corner of the country - from Maine to Nevada, Washington to Florida.  From a former Silver Bullet to current team USA members, from a player with professional experience in Australia to veterans of girl’s baseball development programs like Baseball for All and MLB Trailblazers.  This tournament brought all these players together, most of whom have spent the majority of their careers as the only girl / woman on their team.

They came ready to play.  While the teams were newly assembled for the tournament, they were all competitive and well balanced.  As with any newly formed team some “in-game” communication and strategies had to be worked out, but that did not overshadow the fact that there was some great baseball being played.  There was good pitching and timely hitting, sacrifices and steals, but I was most impressed by the defense.  Outfielders covered a lot of ground, players backed each other up, throws were accurate, and double plays were turned.  My pick for ‘play of the week’ occurred in the top of the fourth in game 1 between the Peaches and Blue Sox.  Blue Sox shortstop Joely Leguizamon went very deep in the hole to snag a hard bounding grounder - then just when the crowed was all thinking ‘wow how did she get to that ball?!’ – she made a long off balance laser throw to first for the out.  It could have been a play of the week anywhere any week.

The tournament was done right.  The professional field was beautifully groomed, the uniforms looked great. Every detail was seen too  - from having the first all-female umpiring crew with each individual having professional experience, to making sure there were plenty of baseballs when the foul balls started flying out of the park. I saw torch passing moments like when the former AAGPBL players gave baseballs to each of the team captains.  I saw 87 year old AAGPBL pitcher Jeannine Lesko throw a first pitch to 89 year old AAGPBL catcher Lois Youngen to start the tournament, and then for the Championship game,  Misdee Wrigley Miller granddaughter of AAGPBL founder Philp Wrigley threw out the first pitch.  What else did I see?  I saw that every player, coach, bat girl and every person in the stands was so happy to be there.  Isn’t that why we love baseball - to watch players who love the game and to be with other fans who love the game?  While I love learning about, celebrating and preserving women’s baseball history, I also want to see new history being made. I am looking forward to see what happens next for these women and I encourage everyone to support the AGB, and buy a ticket to see history in the making next year.

I love that I can go to almost any game anywhere and say to the stranger sitting next to me that player reminds me of so and so, or remember when so and so played here, and they understand. Men’s baseball history is so thick one can trace the entire history of the sport in 10 players whose careers overlapped (Add Adrien Beltre ‘98-‘18 and any current player who started their career in 2018 to this list of 8 compiled by Keith Obermann in 1998 and you’ve got it.  Here is my attempt to tie a few threads of women’s baseball history together for you:

On September 2, 1907, Alta Weiss made her semi-pro pitching debut at age 17.  Lois Youngen met the retired Alta in the town where she was born just a few years before starting her own pro career also at at age 17 when she joined the AAGPBL as a catcher in 1951. Lois cheered for Tamara Holmes and the Blue Sox team throughout the All American Classic in 2022.  Tamara, the veteran of the tournament played pro ball with the Silver Bullets in 1997.  Which one of the other girls in this tournament will be playing pro-baseball in 2027, who will be playing in 2051 or 2097? Hopefully there will be many more to names to choose from and to weave into the growing tapestry of women in baseball.  Would I be excited if a woman broke into MLB? Of course, but I hope that many women get the support they need to have a professional League of their Own again.