By Tom Morgan and Jim Nitz

By Tom Morgan and Jim Nitz

By By Tom Morgan and Jim Nitz 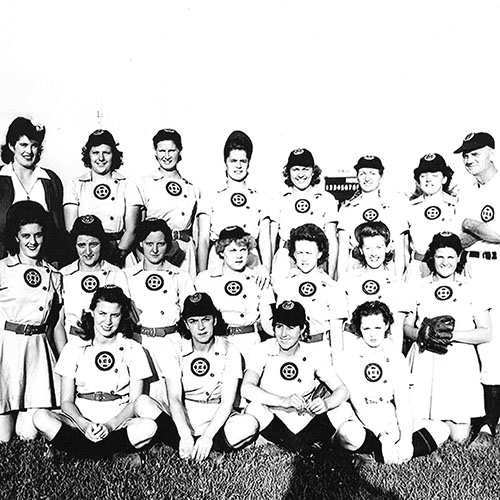 A Team of Their Own Fifty Years Ago, The Milwaukee Chicks Won—and Lost—It All

Who is the only Milwaukee pitcher to win four games of a pro baseball championship series?  Warren Spahn?  Pete Vuckovich?  Connie Wisniewski?

Connie Wisniewski?  She’s the right answer—the star right-hander who led the Milwaukee Chicks to the 1944 title of the All-American Girls’ Professional Ball League and an athlete who left her male counterparts in the dust.  The most games Spahn won in a single series was one.  Vuke didn’t get any while a Brewer.

Even Wisniewski’s searing fastball couldn’t save her team from its ultimate jam:  It played its season in anonymity and red ink, then moved immediately to Grand Rapids.  This year marks the fiftieth anniversary of perhaps the most successful, least loved team in Milwaukee history.

Chewing gum mogul Philip Wrigley started the league—the same one depicted in A League of Their Own—in 1943 because World War II had siphoned off more than half of the existing major-leaguers.  Buoyed by good attendance in towns like Kenosha and Rockford, he added teams the next year in Milwaukee and Minneapolis.

Wrigley apparently gave little thought, though, to naming the new teams.  The Milwaukee Journal dubbed the team the “Schnits,” German for “little beer.”  After another drawing board session, the team came up with the Chicks nickname, inspired by its Hall of Fame manager, Max Carey, and a popular kids’ book, Mother Carey’s Chickens.  Undaunted, The Journal insisted on calling the team Schnits.  “I thought Chicks was a nice name,” says Wisniewski.  “It was a lot better than being a Schnit.”

In those days, the name probably carried fewer sexist connotations than did the everyday press coverage, which sometimes referred to a player’s “sturdy shanks” or other physical attributes.  The players didn’t seem to mind.  “We had swell write-ups,” says Thelma “Tiby” Eisen, the left fielder who was described as “a wisp of a thing” with “iron biceps.”  “They even started calling me “Little Pigtails,” which was true.  I had good legs, but I wasn’t a raving beauty.”

The press’ favorite, Pat Keagle, was tabbed the “Blonde Bombshell.”  The Kenosha Evening News said the 5-foot-2-inch, 144-pound right fielder had “murder in her bat and speed to spare in her strong, sturdy shanks.”  (Keagle died of cancer in her 30s.)

Wisniewski wouldn’t have made it out of her front door in Detroit if not for some heavy lobbying of her Polish mother, who insisted that “only bad girls leave home.”

“I gave her several options,” Wisniewski recalled.  “I said it is either the military for four years or baseball for four months.”

The Chicks also received minimal press support.  The papers wrote few feature stories on either the team or Carey’s 17-year Hall of Fame career with the Pittsburgh Pirates.  The most energetic coverage, in fact, was the Sentinel’s sharp critiques of the 95-cent ticket prices, the same as those for the minor-league Brewers, even though the games were shorter and sometimes satiated with errors.

The team struggled at the gate, if not at the plate.  A total of 2,300 people came to the Chicks’ first four games, while the higher-exposure Brewers drew 13,694 on opening day alone.  “We knew as early as mid-June that Milwaukee was a bust,” says Ken Sells, then league president.

The Chicks showed tenacity, however.  Hours before the June 10th game, catcher Dorothy “Mickey” Maguire received notice that her husband had died in combat.  She caught that night anyway, and even held off telling her teammates until after the game.  Seven weeks later, Maguire received two letters, both from her husband.  It turned out he’d only been mistaken for dead because he’d been burned so bad.  He was shipped home after the season, but the couple divorced seven years later.

By August, the Chicks began dominating opponents, often by dint of their speed and pitching strength.  As the 10-time league leader in stolen bases, Carey quickly taught the art of legalized larceny.  “Max taught us how to cherry-pick our times to hit and run, steal or take a pitch,” remembered Eisen, the explosive left fielder from California.

And the pitching of 5-foot-10-inch Wisniewski, later nicknamed “Iron Woman,” was practically enough to win games on its own.  “One or two runs was enough for her.  If it was a must-win game, Connie pitched,” says Viola “Tommy” Thompson, the Chicks’ left-handed starting pitcher from South Carolina.

As management tried to stem the team’s financial losses—even bringing in the Milwaukee Sinfonietta as a musical pre-game draw—the team kept winning.  An 11-game streak in August propelled the team to the championship series.  But true to form, the Chicks’ luck faced a complication.  Because the Brewers needed Borchert Field, all seven games were played in Kenosha, which the Chicks actually found more inviting than their own park.

Wisniewski felt especially at home, pitching an amazing five out of seven games and winning all four Chicks’ victories.  She yielded a miniscule two earned runs in 35 innings.  “I pitched with my whole body, not just my arm,” she says.

Just after the post-series corks were popped, however, the league moved the Chicks to Grand Rapids for the 1945 season, where they stayed until the league’s demise in 1954.  No one remembers anyone—not even Milwaukeean Sylvia Wronski—feeling homesick afterward for the town that all but ignored one of its few championship teams.