By By Prudie M. Bretting 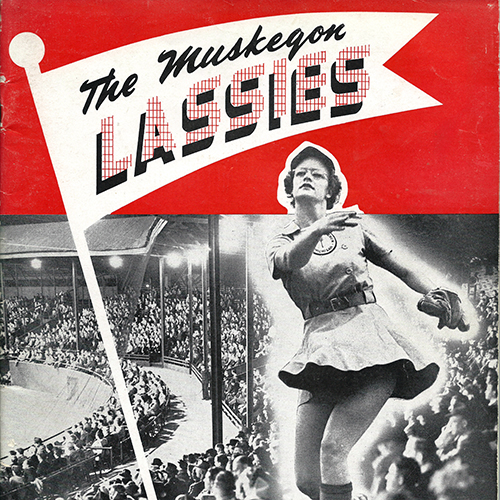 When Irene Castle bobbed her hair she not only altered the appearance of women all over the world but also changed the conversion of the men's haven - the old fashioned barber shop. No longer can men tell stories about the farmer's daughter for there may be a farmer's daughter listening in. The men have lost their haven, the clock will never turn backwards. One girl in the world did just that.

When the Lassies ran out to Marsh Field, they, in my estimation, pushed the hardball almost into the basement. But that is not all. They, I truthfully believe, made the first progressive move toward a Greater Muskegon. While the Lassies are known throughout the United States as the Muskegon Lassies, we, in Muskegon Heights, know they are OUR Lassies too. In fact, the Lassies' organization bears the name "The Greater Muskegon Girls' Professional Baseball Club."

For a time, I "covered" the Lassies in their dressing room. What did I find? I found a bunch of girls who were not only tops as baseball players but ladies to the core. They were good sports, too. At the annual dinner preceding the first game, the directors promised new hats if they won the series from Grand Rapids. Maybe they got them - maybe they didn't - but they came in the dressing room singing "We did it before and we can do it again." That was only the beginning of the many songs they sang. They were free with their praise of the other girls' play but sparing, very sparing of any criticism. Yes, indeed, our Lassies are ladies. They showed it over and over again in the dressing room.

The Lassies were here to stay . . . their organization was built on a firm foundation. In just two short seasons these girls who have come from all over the United States and Canada to play baseball in Muskegon have won for themselves the acclamation, admiration and intense interest of many people who would ordinarily not cross the street to see a game of baseball.

Why all the hullabaloo? What is it about this game that causes staid businessmen, doddering grandfathers and snaggle-toothed bobby-soxers to unite in one common whoop of frenzied joy everytime the Lassies score a run or make a double play?

What kind of show are their skirted-slugger Lassies putting on that could possibly attract over 140,000 paying customers in a single season, while some of the other AAGBBL clubs in the cities of approximately the same size as Muskegon couldn't coax anywhere near as many customers into their ballparks?

These questions have been posed in the minds of many interested parties.

There are answers - logical answers. Let's look at a few of them. First of all, the game of girls' baseball has brought to the sporting scene something that, in this age of mechanical action in sports and everything else, is sadly lacking. That "something" is color. Even in these years of emancipation for women in every field from politics to soldiering, (even "newspapering") it's hard for a man to realize that women are people, that while perhaps they may not bring the skilled finesse and speed to a baseball diamond their male counterparts are innately capable of, they can put on a show for the fans that will bring them back again and again, and again. Males of all ages are intrigued by this athletic phenomenon. Women of all ages love to see the fair sex in play.

The greatest fault that can be found by the average fan with the game of baseball, from the spectator point of view, is the fact that there are moments in the diamond play when minutes drag. There just isn't enough continued action to satisfy all the more fidgety patrons.

It is to the credit of the girls' baseball that this type of person finds in "the new game" a faster moving, more colorful and exciting sport than the man's game. I know that is true, because I am one of the many "fidgety-bridgets" who go to watch the Lassies every time they are in town. There is never a dull moment at a Lassies game. Last year at one of the games the fans had an opportunity to watch a Lassie's rally at the plate in the ninth inning, a building burning across the street, a trouble-maker being dragged bodily from the stands by two burly guards . . . all this at the same time and at no extra charge.

But there is always someone who isn't quite satisfied. For instance, one patron was put out that it didn't rain - so that he could get a rain check out of the deal as well. In the play-off when the Lassies were not up to par, another patron said: "That ends the Lassies with me. I will never go to another game." The Lassies won a thriller in Racine the following Saturday night--this self-same male was on the Clipper Sunday to see "his" gals in action.

There are several more reasons for the popularity the Lassies have found in Greater Muskegon.

The girls showed themselves to be panaceas for the ills of juvenile delinquency by giving hundreds of girls, yes, and boys too, the chance to learn something about the game of baseball last season through the innovation of a baseball clinic at Marsh Field. That clinic, I understand, will be bigger and better this coming season.

The clinic was well received by the youngsters, overwhelmingly so, in fact. It won't be long now before that school for female enthusiasts will be paying dividends for the Lassies. Some of the youngsters showed marked ability and in a few years might find themselves in the Lassies line-up. Looks like the Muskegon club has a "farm-system" in its own backyard.

One could talk on and on concerning the value of the Lassies to the community, but let us end with the fact that the Lassies are real ladies, on and off the field. Their conduct here has been impeccable. They are a tempering force in the community and a binding influence between Muskegon and Muskegon Heights--two cities that in other respects are warm rivals.

Yes, indeed, just leave it to the girls.