By By James F. Henderson - Sports Editor, The Muskegon Chronicle 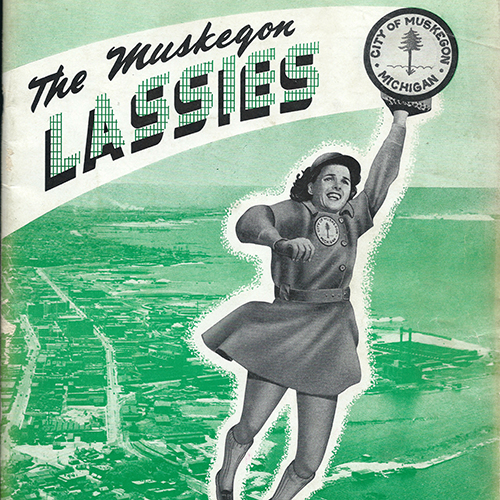 An Englishman, claiming his country originated baseball, once referred to the American National Pastime as "Glorified Rounders" ...

A Muskegon fan, before he became of the dyed-in-the-wool variety, was heard early in the summer of 1946 referring to Girls Baseball as "Glorified Softball."

The game isn't softball ... Nor yet is it baseball, the men's game of wide-ranging outfielder, 300-foot or more home runs, of "bean-balls," of tobacco chewing, of grudges against rival teams or against umpires.

The 1946 season of All-American Girls Baseball League opened in Muskegon with many skeptics ... We must confess that one of the greatest was the sports editor of The Muskegon Chronicle.

For the first game (and it was the first ever we had the privilege of seeing, despite many invitations to see the girls play at Grand Rapids in 1945) we arrived early, to see "glorified softball," played by girls in abbreviated costumes, thereby heightening the customer appeal.

We never compared it to baseball in our mind. The reason for this was the fact we had seen girls playing baseball before ... Remember (if you're old enough) the "Bloomer Girls" who paraded around the country more than two decades ago? Rough and ready, eager for the battle or arguments, but still unable to play formidably against men's teams, even the brand of ball seen in shop leagues.

And at that the Bloomer Girls used male pitchers and catchers.

We might have had a glimmer of the possibility that girls CAN play an acceptable brand of baseball, on the diamond, and with a ball, cut to their size and strength. "We had played with and against a girl in the early twenties who COULD PLAY MEN'S BASEBALL WITH MEN.

Old timers still sing the praises of a Nunica girl, Mildred Gordon, feminine, dainty, pretty, yet a whiz on fielding second base, and throwing from any angle hard enough to sting the gloved hand of a first baseman. Mildred, whose brothers were outstanding baseball players, had to learn the game, and do a good job, or go back to tending dolls. She didn't like dolls particularly, so developed into a fine baseball player.

But even with Mildred's playing far back in our memory, we were among the baseball fans who had to be convinced.

Whisper this in the presence of the enthusiastic directors, and the players, of the Muskegon Lassies of the All American Girls Baseball League:

However, we've become a fan.

We were introduced to a new American sport, and one that some day will retire the current brand of girls softball to the limbo of forgotten things. It's a game that will grow, year by year, attracting a new sort of follower.

On a miniature diamond (when compared with the men's baseball) the girls do everything the men are asked to do. They field and throw, hit and run, make sensational catches, slide into bases recklessly, suffer painful injuries ... And when girls are finally weaned from their basic thinking along softball lines, they'll be thinking baseball.

We found the Lassies unlike the once-popular but inefficient Bloomer Girls ... They represented the best of this Nation's softball players, and the best from Canada ... Far removed from the Bloomer Girl who is alleged to have quit her best boy friend because he wouldn't loan her a "chaw of tobaccer."

The dream of Phil K. Wrigley come true! His vision was of a league of ladylike women who could fill National League parks when home clubs were on the road; making a continual rush for the turnstiles; enriching the owners, and at the same time providing steady employment for ushers, ticket takers, and the many who must be used at the great stadia to keep it going.

But the girls never did fit the bigger ball parks. Milwaukee and Minneapolis found comparatively little interest in the game.

Muskegon now is one of the cities in which the dream has been proven practical.

We would warn any follower of men's baseball not to expect the men's brand of ball when attending games played by girls.

We would warn them not to expect a "leg show" as their entertainment.

We would warn them, however, that they'll be interested, and that they'll return time and again ... Not to LOOK at the girls, but to watch them play, to cheer at brilliant plays and groan at poor ones.

We would warn them it will take many evenings away from the pleasures of movies, taverns, beaches ... For once initiated, it will become second nature to start for the baseball park when the local girls are at home.

One of the remarkable features of girls baseball is the type of fan attracted.

Near The Press Box, a couple of elderly fellows sat at each game, shouting encouragement to the girls and taking to task anyone who said an unkind word ...

Back of us half a dozen women, fresh from their aprons, and their faces still reflecting the heat of cooking ovens, argued the merits of the girls, and took issue with anyone on the inside baseball being presented ... They learned quickly.

At one side a man and his wife who never missed a game ... A cripple who hobbled in each night, feeling in the game the thrills of competition his withered legs never would allow him to experience personally ... Another group of housewives with the same seats each evening, obtained by arriving earlier than other fans.

On the other side a group of office girls and their boy friends, at each game ... More housewives, school teachers ... And here and there, sprinkled through the crowd, (entering for the first few games rather shamefacedly, then became sold on the game, openly and eagerly), fellows who seldom miss a game of men's baseball.

These are the fans who seldom thought of, and soon forgot the last names of the players, who quickly learned the nicknames the girls prefer, even if the league officials believe it sacrilege for an official announcer to use such terms as "Shorty," "Cookie," "Tex," "Lefty" ...

It's modeled on men's baseball, of course. The bases are shorter, for women do not run as speedily or as strongly as men. Track and field records of the world's best athletes of the rival sexes would indicate this. Men have run 100 yards in 10.4 seconds. Women seldom run that distance in under 12 seconds.

The bats are lighter, a cross between the slender toothpick softball players (of both sexes) use, and the heavy bludgeon that send men's baseballs crashing over fences 300 feet or more away.

The ball is midway between the accepted size of softball and baseball as used by men. But it's hard, can sting when a batter is hit by a pitched ball, or raise a goodly lump when a ground ball is deflected and strikes the fielder instead of the fielder's glove.

The game itself, from that point is baseball with one other important drawback to the game.

A shorter distance from the mound to the plate is one reason, and a desire for more hitting is another.

Women (most of them) are poor hitters. The coordination that made such sluggers as Babe Ruth, Lou Gehrig, Joe DiMaggio, Dick Wakefield, appears to be lacking . . . Few ground balls will be hit hard enough to get through any infield in the league without an infielder at least touching it.

There were notable exceptions. Muskegon had two of these, girls who are expected back for this season, Doris Sams, the Knoxville, Tenn., girls and Alva (Tex) Fischer. They could drive the ball far, and often handcuffed infielders.

Our opinion is that underhand pitching is responsible for this lack. Few male batters could hit a slowly pitched ball far and fast. The batter must put all the power into the swing, where a fast ball, if met squarely, adds to the impetus when it leaves the bat.

This year should see more hitting. Many girls were fearful of striking out, and thus swung halfheartedly. Certainly, Sams and Fischer fanned at times. But they also drove out triples and doubles. And it's the long hit in the clutch that decides games.

This year more sidearm pitchers will be used. The rules now permit a girl to throw sidearm provided the ball doesn't go above the waist. That should prove more difficult for the hitters, but also elevate the girl who "goes for the long ones" to her proper place as a high salaried drawing card of the game.

The costumes? Girls are not hired like chorus girls. They're hired for their playing, but the league directors were smart enough to devise costumes that are comfortable, allowing freedom of movement, and yet give rise to statements frequently heard as fans leave the field:

Yet when the game is on, fans forget the costumes, and the cuteness and the daintiness of the girls.

They see a team that goes out to win.

Wonder how many men would tear into a base feet first, knowing the certain penalty would be a bruise on a bare knee?

The girls forget themselves in the heat of the game, giving everything to win. When they do they are jubilant. When they lose downhearted. Just like men.

Last year close to 90,000 fans paid to enter Marsh Field to see the Lassies play. The figures show two-thirds of these were attracted in late July and August, usually the months when patrons of men's baseball leagues fall off.

With a fast start this year the unheard figure of 150,000 might easily be the goal of the club, with a chance of attainment.

That's the answer to the NEW GAME.

It has caught on here. A game played by women before an entirely new brand of fan, many of whom never saw a baseball game, unless under protest, until the Lassies came to town.

We're predicting long life to the local club, as long as it attracts the new, gender type of fan who can watch the home team lose and still declare, in passing out of the park:

Yes, indeed, just leave it to the girls.